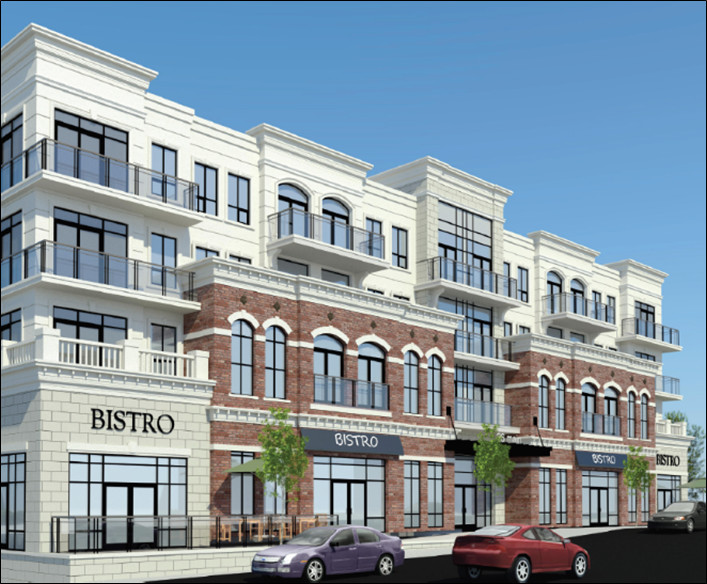 With most of the Committees wrapped up for this term of Council, it’s been a little slower than usual on the news front.  But we did have a *very*  interesting P&D meeting on Tuesday with the proposed Century Condos downtown being the highlight.  And of course we have the notes for your review…

Alderman Wilson stood in as Acting Chairman of the meeting due to Alderman DiFlavio being unable to attend.

The community was out once again in “full force” to express their ongoing frustration with the overwhelming residential density proposed (92 units) and potential negative traffic and parking impacts for the site of the old Roxy Theatre downtown.  This statutory Public Meeting was required under the Planning Act due to the Town not having posted signage on the property 20 days prior to the October 9 meeting.   See our previous  posts on the Open Houses and previous Public Meeting by clicking this link here.

Mr. John Ariens of the IBI group, representing the developer, presented a similar report to the one he presented at the October 9 Public Meeting.  Some statements made varied from what had been previously presented.  He indicated that there would be 109 residential underground spaces plus 5 tandem spaces. He stated that 1.24 spaces per unit was being provided, just 0.01 short of the required 1.25 spaces per unit. 31 surface visitor parking spaces  – 23 visitor and 8 commercial, would all be shared.  Further in the presentation, he retracted that and stated that the commercial would be dedicated parking spaces.

He also stated that the developer had rethought closing the laneway abutting the building and would now provide an easement through the building to Doran.  He suggested that the merging of the properties could occur at the site plan stage.  At the end of his presentation, Mr. Ariens asked that Committee consider changes to the Zoning By-Law Amendment in the agenda and proceeded to hand the Chair a document.  The Chair accepted the document.

The Deputy Director of Planning then presented.  He noted that an amended heritage report had been provided and was currently under peer review and that the title and ownership of the laneway was under legal review.  At the end of his presentation, he noted that staff were proposing an amended recommendation (from the original recommendation and motion as stated in the October 9th SGL peer review):

Based on direction received from the Town Manager staff are not recommending any action be taken on this tonight and instead are recommending that the Report just be received as information.

As most feel the proposal needs refinement, the recommendation was well received by the audience in attendance.  They then had their opportunity to come to the podium and raise their concerns and questions.  Items raised by the public included:

The Director of Planning also provided comments and noted that discussions were ongoing regarding the façade design to focus on looking like a commercial streetscape first, residential second.  The Deputy Director stated that the property fronts on two roads and opportunities to service the site would be looked at during site plan approval. Infrastructure upgrades and costs would be the responsibility of the developer.  The “KISS and Ride” sign and lane were not approved and this should be addressed with the new Principal of the school.

With regard as to why 25 Main Street East is not referenced in the new application and Zoning By-Law Amendment (ZBA), the Deputy Director stated that 23 Main St E has merged with 25 Main St E.  The 2008 approved ZBA and application by Dr. J. Paolasini at 25 Main St E and 6 Doran did not come to fruition.  As far as he is aware, the laneway was never closed and ownership of the lane is currently under a title search.

With regard to the documents and amended ZBA handed to the Chair by Mr. Ariens, the Deputy Director noted that any amendment brought forward today will be looked at. In future it may be incorporated into the By-Law when all requirements have been met.  The draft By-Law will be made available for review.  All studies are available to the public and can be provided by email or for review in person at Town Hall.

Mr. Ariens responded to questions regarding the discrepancy between the interpretation of the shadow study provided in the developer’s application and that provided by a resident experienced in shadow analysis.  He stated that “four storeys will cast a shadow, in suburban areas you protect different than in the downtown – it’s how you interpret it”.  With regard to the potential liability for the laneway, he noted that going through the building was not supported initially, but for the “bigger need”, they were prepared to accept that risk.

With regard to extending the sidewalk, Mr. Ariens stated that the developer will put in a sidewalk on Doran to the school if the private owner permits it.

Member Gillespie stated that the north side of Doran is in the transition area of Downtown and “in a few years from now they (the single family homes) won’t exist – that’s the way it is going to go.”  He stated that “we need people downtown – boots on the sidewalk, not on the accelerator”.

Due to the position of Planning Staff and the Town Manager to receive the report only as information (no action to be taken at the time), an amended motion to just receive the Town’s report and SGL peer review recommendations contained therein was voted on and defeated.  The original motion to receive and approve the ZBA “in principle”, with a number of conditions to be met prior to signing off on the ZBA, was carried.

That Report P.A.18-32 regarding Official Plan and Zoning Amendment applications by Homes by DeSantis (Downtown) Inc.,21, 23 Main Street East and 6 Doran Avenue be received and:

Further, that staff is hereby authorized to commence the process for the disposition of the lane described in the report in accordance with Town policy.

In a surprising move, the members of the Planning Committee went against the recommendations of Town Staff and Town Manager.  Which left the door open for what looks like will be a *very* interesting Council meeting on November 19th.

SO… WHAT CAN WE EXPECT AT COUNCIL ON MONDAY, NOVEMBER 19TH?

With this being the last sitting of current Council, there seems to be apprehension from the developer in so much that he was not satisfied with decision of the P&D Committee and wants to have his development pushed through.

He is bringing forth his planners and a Bay Street lawyer to go even further, ignoring the motion passed at P&D and putting forth a significantly changed ZBA, one that was not discussed at the Public Meeting and is asking for Council to approve it without it having been vetted through Planning or a public process.   Details of the 11th hour Zoning By-Law being dangled in front of Council are as below: 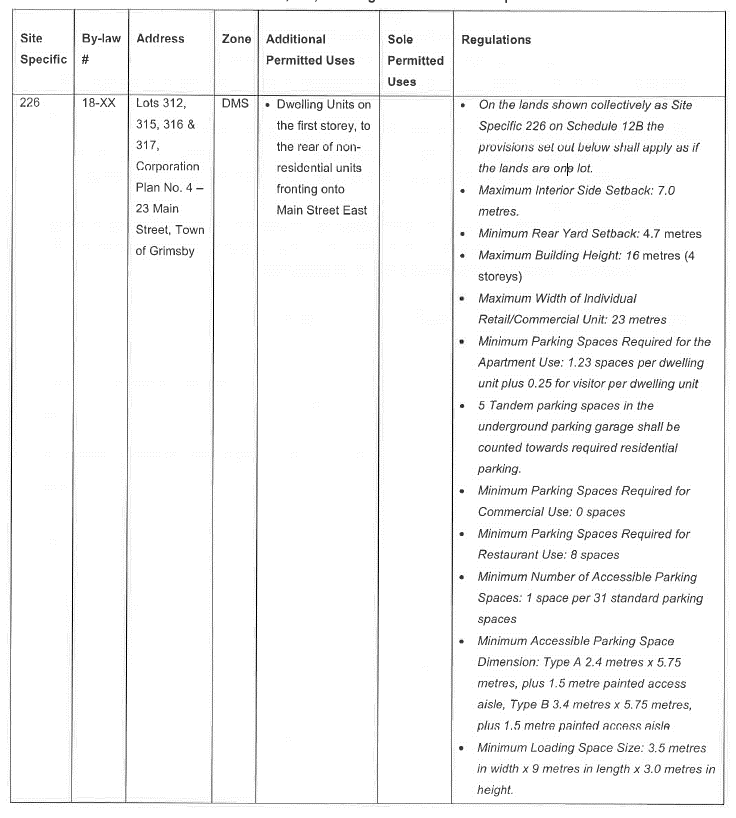 We found the following changes quite interesting:

Previously, the developer had applied for and been approved reduced parking standards for the Corporate Centre, shared parking with the Aquablu visitor parking and 77 spaces of the AquaZul visitor parking.

The current proposal includes significant increased demands for parking with new proposed uses including a post-secondary school, stand-alone clinic and research/laboratory.  Mr. Ariens, IBI group and representative for the developer, insisted that the medical clinic could not be an “accessory use” but must be stand-alone.

Planning staff noted that the provided parking study did not use relevant surrogate sites, was inaccurate, and should not be considered. Staff creatively applied the high density mixed-use parking standards to demonstrate that sharing 216 of the visitor parking spaces between the three buildings would be sufficient.  Concerns were raised by the public that permitting all surface visitor parking to be shared will not be sufficient and create enforcement issues for the condominium corporations.

“The applicant is proposing to expand the easement over the AquaZul lands to include all of the surface parking. This means a total of 120 parking spaces would be available on the AquaZul lands for the Corporate Centre to be shared by the visitors of the AquaZul residents. This is in addition to the 96 available on site and on the existing AquaBlu easement for a total of 216 spaces. There are also 34 additional parking spaces located fully or partially within the 14 metre MTO setback that are not permitted to be counted towards the total required parking for the site.”

Considering the Corporate Centre is anticipated to draw 250 employees, including 50 Homes by DeSantis employees, it will be interesting to see if any parking spaces end up assigned and marked for “exclusive use”.  Read more details in the NTW article:  https://www.niagarathisweek.com/news-story/8966936-homes-by-desantis-breaks-ground-on-corporate-centre/

This Monday’s Council meeting should be an absolute “blockbuster”… with the attempt by the developer to push the proposal through without any conditions, contrary to the recommendations of the Town Manager, Town Planning Staff & the P&D Committee.

More or less, this could go two ways.  At worst, Council in the last meeting of it’s current term could just rubber-stamp whatever the developer is demanding from them without forward-looking at the impact or other implications.

But lets also look at the best-case scenario… it’s the last Council meeting for most of those sitting and hopefully  they want to finish the term with nobility, which would mean sending the plan back for further refinement or a tabling a resolution similarly.

Having attended all the meetings on this proposal, there is almost no one in the community saying “No, we don’t want this project downtown”… rather, the voices of the community are simply saying “this proposal needs to be better integrated and the issues it may create, addressed”.

The current proposal, people are not happy with… so it would be a tough argument to say as it stands, is in the Town’s best interest.  There is a workable solution out there that will make most of the people, whether it be the developers, residents and business owners, happy.  Arguing about stucco vs brick is proper at the site plan stage, but important considerations such as the mass, size and adverse effects of a building are not… they need to be dealt with before a proposal is laid on the table of Council  for final approval.

If this building is to be a blueprint for re-development Downtown, it needs to be done right… not pushed through at the last minute.

We hope Council keeps this in mind when voting on whatever motions, amending motions or discussion comes up on this item surely to be lifted for consideration.  Their decision on the current form of this proposal, whether it be in favour of the developer or the listening to the community, will be the lasting legacy of this term of Council.

Council will meet this Monday, November 19th at 7PM @ Town Hall.  As always, residents are welcome and encouraged to attend.