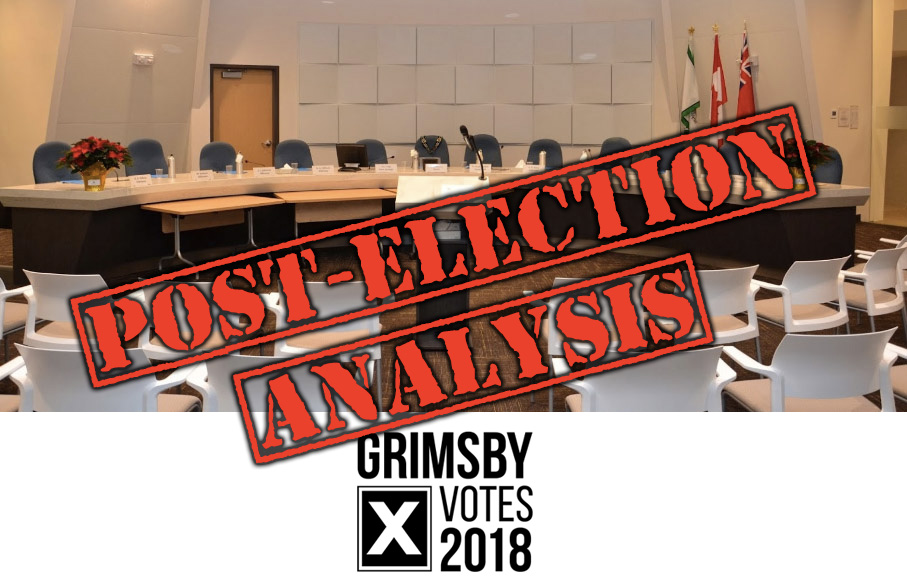 Although it was only Monday that the polls closed, it along with all the campaigning seems to have been so long ago.  In this post, we are going to look back at the numbers and do a little analysis on the election.

Can I Get Your Number?

Well, we are sure most people at some point in their life have used this line (or been subjected to it)… but lets take a look at the Official numbers as certified by the Town Clerk:

How did Grimsby fare in contrast to the rest of the region?  We have a sortable table below:

On the whole, Grimsby ranked in the top third of all 12 of the municipalities in Niagara for voter turnout.  The overall turnout for the region was 39%.  So overall, pretty good.

For most of the newly elected candidates, they had a clear and concise platform on key issues facing the Town and their positions on them.  This author’s review of incumbent campaign material, with the exception of the outgoing Regional Councillor, championed past achievements with little or no forward-looking information.

Key issues facing the Town were largely not addressed or even mentioned outside of debates (more on these later).  Those incumbents up for re-election may have addressed them going door-to-door but for those who only received a flyer or door-hanger, there seemed to little or no vision .

By far the biggest issues based on page views both on our Facebook and website presence were related to development in Grimsby.  The new candidates addressed the issue head on, the incumbents largely avoided the issue, perhaps given the record of their voting for approval of large-scale developments (except Alderman Kadwell).

With those points in mind, the impression most incumbents left with voters is that if they were re-elected, it would be “business as usual”… and unfortunately for the-now-outgoing Council, their past business conduct did not sit well with voters.

While we did cover the topic of debates largely in our previous post “The Great Debate Debate“, it is worth mentioning here again in our post-election analysis.

Other than the Chamber of Commerce’s Mayoral debate and “All Candidates Meet & Greet”, most of the incumbents aligned themselves together and refused or declined the Ward Alderman debates.  Although some cited scheduling as reasons not to attend, all incumbents up for re-election should have made the effort to be there by any means necessary.

With the exception of Alderman Dunstall, Kadwell and Johnston, the rest of the current Council did not participate in these debates.  The rest of the Alderman squandered a valuable opportunity to connect to the community.  The debates were well-attended and well-viewed on YouTube and had these other incumbents decided to participate, they may have been better-off by articulating their positions and perhaps capturing more votes to get past the post.

In summary of debate Alderman attendance, of 8 incumbents, 3 took part in the debates and 2 of those were re-elected.  When you have an audience waiting, it is best not to disappoint by not participating.

The Municipal Election of 2018 in Grimsby was certainly one of the more memorable ones that we have seen, even when considering other municipalities.  But all is not over for the current and outgoing term of Council, with a few more Committee and Council meetings yet to go.

Despite election night results, lets hope that the outgoing Council will display cordiality and stewardship to ensure a smooth transition to our next term of Council and the good of the Town.

EDIT:  By request here are the Official School Board Trustee results: