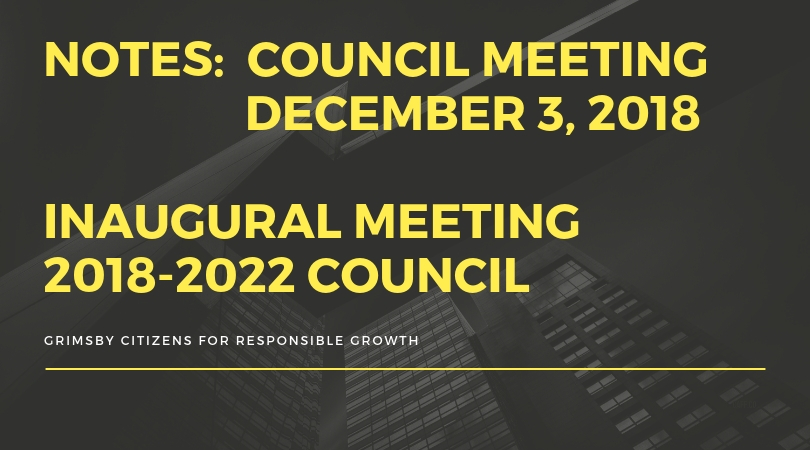 The first meeting of the new Council took place this past Monday, December 3 and although the agenda was light as business is rarely transacted at inaugurations, there is always notes for you.

The inaugural meeting was well attended with the glass partitions of Council Chambers opened up with the overflow crowd seated in the Town Hall foyer.   The Aldermen-Elect and Mayor-Elect were piped into the Chambers with a bagpiper and “O’ Canada” was led by the Blessed Trinity Secondary School Jazz Choir.

The Mayor and Aldermen both new and returning were then sworn-in individually with their Declaration of Office by the Town Clerk, Ms. Hazel Soady-Easton.  This was followed up by a short invocation by the Venerable Max Woolaver of St. Andrew’s Church delivering spiritual well-wishes for the new Council and those in attendance.

Mayor Jordan delivered his inaugural address touching upon the new Council’s commitments to Grimsby and  letting residents know that this new term of Council is ready to listen and work for them.  Among some of the issues cited that need to be addressed are fiscal responsibility, curbing overdevelopment, protecting our natural heritage and ensuring that we get a rebuilt/new WLMH.

You can read more about the Mayor’s inaugural address in this Niagara This Week article:  https://www.niagarathisweek.com/news-story/9065856-jordan-looks-ahead-to-term-of-promise-for-new-council/

Council then proceeded to undertake their first meeting, which in accordance with tradition, only deals with formalities and not typical business of the Town.   This included completing signing authorities for the Town and assigning the rotating role of Deputy Mayor over the Council’s term.

One notable By-Law that was passed later in the evening was the formal changing of the title of Alderman to the more politically correct term of “Councillor”.

The assignment of Councillor’s to the Town’s four standing committees were also read out, the Mayor by default is a member of all Committees:

During discussion of the Committee assignments, Councillor Dunstall refused his appointments citing that he had not been given his “due process”.

This author was intrigued and searched the Town’s By-Laws and governing documents and was unable to find any process that Councillor Dunstall was referring to.  In that search it was discovered however that declining the positions may be contrary to the Code of Conduct for Council.  That Code can be found here:  Code of Conduct for the Council of the Town of Grimsby

As such, to meet the number of required Council appointments per committee, Councillors Freake and Vardy stepped up to fill the positions declined by Councillor Dunstall.

There was also two award presentations that evening on behalf of the Joint Accessibility Advisory Committee for the “We Are Accessible” campaign.  Awards were presented to Canadian Tire and JJ’s on the Docks Eatery.

Following those immediate matter of business, the evening and first meeting of Council was formally adjourned.  Most of the audience stayed around for some time, taking the opportunity to meet and talk with the new Mayor and members of Council .

The next regularly scheduled meeting of Council is on December 17th at 7PM at Town Hall.  As always, the meetings are open to the public and residents are encouraged to attend.